To start us off on our Ebbing Tide blog here is a review of what the Commissioners of Enquiry into the State of Irish Fisheries found out about the state of fisheries and fisherment in Dingle, Co. Kerry in 1836.

Please submit your stories for our An Ebbing Tide… Heritage Week project: CLICK HERE for info. 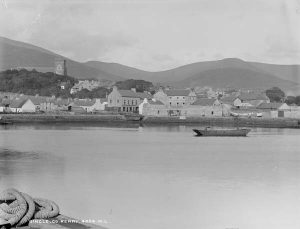 The fortunes of Dingle fishermen were in decline in 1836, with government bounties for fishing removed and the linen industry that employed wives and children now gone, fishermen were becoming impoverished. Even in 1836 the impacts of overfishing were evident – “there formerly was an abundant bay or inshore fishery, for which the open boats were quite sufficient; however, between trammels and seans (seine netting), the bay fishery has totally failed”.

The fishermen now had to pursue fish in deeper waters but lacked the type of boats needed to safely do so. The fishermen used “spillards, about 300 hooks to each boat, for taking cod, haddock, gurnet, sole, and plaice; hand lines for the hake fishery and sometimes long lines for cod, ling and eel.” One fisherman reported that in his fishing area, a mile off Dowlas Head (Doulus Head) he had taken “large quantities of plaice, and the finest black soles – but the fish of which he has taken the most are haddock, of the finest quality”.

Blasket Sound was reported to “abound in the finest flat fish; and cod and ling are found in the the largest quantities off Bray Head, near Portmagee”. Local fishermen reported a bank some “25 leagues” west of the Blasket Islands and “denoted by unusual number of sea fowl” where there were large quantities of the finest fish, vessels “in a short time nearly filled the decks with Cod, Ling and Eels” and reported that it was “possible to take more fish in a week here, than in a month on the east coast”.

The Dingle line fishermen blamed the use of trammel nets on the decline in the local hake fishery. Sections of trammel belonging to different fishermen were joined together to form long nets. The line fishermen reported dead and dying hake being found, having escaped from the nets, and that it was not unusual for bad weather to prevent the nets being taken in and large quantities of hake rotting in the nets as a result. One line fisherman reported that “he himself used to kill one thousand hake during the season, while now he does not get two hundred”.

The fishing ground off Minard Head was reported to be the best in Dingle Bay, with fish often taken in great abundance off Annascaul. “the shoals of hake go up to spawn about the first week in September, and on their return after spawning, they used to be taken in great abundance by the Dingle line fishermen before the trammels were used, but those nets now interrupt their progress to the sea and the line fishermen get no fish.” The fish taken in the trammel nets were also reported to be of inferior quality, and were battered and bruised compared to the line-caught fish.

The fishermen also reported the collapse of the Bay’s drift net herring fishery due to the use of “sean nets” (seine nets). However, Rev. Healy, Parish priest of Brandon, reported that no herring had appeared in Brandon Bay in the past 10 years, despite no trammel nets being used there.

Can YOU find and record 7 Seaweed Species, with photos, from your local rocky shore? If so, YOU can complete the 2nd Mission of our FREE Marine Biodiversity Citizen Science Online Course! https://exploreyourshore.ie/marine-biodiversity-open-course #ExploreYourShoreIRL

June is the peak month for records of Moon Jellyfish to #ExploreYourShoreIRL and #TheBigJellyfishHunt. Easily recognised by the four pink circles in their bell, they have a very mild sting that most people don't even notice. http://www.exploreyourshore.ie