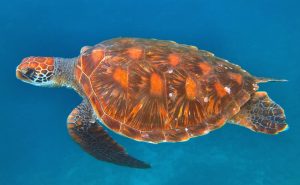 Ireland’s seas are fortunate to host marine turtles as they make their ocean migrations seeking food and sometimes just meandering off course. 5 marine turtle species have been recorded in Irish waters:

Of these, Leatherback Turtles are the most frequently recorded and Irish waters form part of its natural foraging range. The other species tend to be recorded as strandings, though at-sea records of loggerhead turtles have also been made.

As Ireland lies outside the natural range of most marine turtles (other than Leatherback) they are often found in a distressed and/or lethargic state when washed ashore here.

It is vitally important that any live stranded marine turtles are immediately reported to the Dingle Oceanworld Aquarium on Facebook (@seaturtlerescueireland) or by telephone. A stranded turtle that looks freshly dead may still be alive, but lethargic.

Records of all marine turtles, whether alive or dead, at sea or on the shore (stranded), should be recorded Using This Web Form, to contribute to the Irish Marine Turtle Database.

Can YOU find and record 7 Seaweed Species, with photos, from your local rocky shore? If so, YOU can complete the 2nd Mission of our FREE Marine Biodiversity Citizen Science Online Course! https://exploreyourshore.ie/marine-biodiversity-open-course #ExploreYourShoreIRL

June is the peak month for records of Moon Jellyfish to #ExploreYourShoreIRL and #TheBigJellyfishHunt. Easily recognised by the four pink circles in their bell, they have a very mild sting that most people don't even notice. http://www.exploreyourshore.ie